In Memory of Precious Greyce

Greyce had an adventurous life with at least two different caregivers before fending for herself during an extremely cold, snowy and icy November in 2002. By the time I found her on my icy sidewalk (December 5th) she had been on her own for about a month! Yet she bounded over to greet me and insisted on following me inside. And when Himself got home that evening, she followed him to the sofa, settled on his lap and started to purr. From that moment, it was obvious that Greyce had found her new home - even though we tried very hard to find her previous purrson.

We did our best to provide Greyce with a home she could enjoy, but life was far from easy for her.  Soon after her arrival she visited veterinary specialists for ultrasounds and a biopsy. The specialist gave her a six-month prognosis at best. Greyce beat that by more than a decade, though her severely compromised kidneys would present all kinds of challenges. She was no stranger to pain or illness, battling chronic pancreatitis, irritable bowel disease, and the side effects of renal problems - including high blood pressure and a potassium deficiency.

Yet Greyce's had a full and rich life. She had unrestricted access to a large backyard protected by a cat fence. And she spent many hours hiding under the junipers and observing the birds. She also liked to monitor the voles in the compost piles in the back garden. In the winter, she would huddle under a bench on the upper deck to maintain her surveillance of the property.

Regardless of her backyard activities, she was insistent on having walks out for the front door (on leash and harness) and enjoyed exploring the surrounding neighbourhood. She could never understand why her purrsons would not buy up about a dozen surrounding properties so that she could have unfettered access.

She was adored by both of her purrsons but it was clear that her heart was captured by Himself. They ate together, read the paper together, gardened together and went for walks together. She would sleep on his chest while purring and gazing into his eyes. Herself was truly 'the other woman'.

As Greyce aged, her ability to bounce back from repeated bouts of illness was compromised. And over the past several months, she began to change. Yowling, agitation and restlessness were some of the symptoms she experienced - randomly and at all hours of the day and night. Taking her own advice for anxious cats, Greyce used Feliway, night lights, the placements of various bowls of food and water, exercise, and behavioural medication. And while some of this helped, it wasn't enough to remove her terror.

It appears that Greyce had some form of dementia. There was nothing more to be done.

On Wednesday July 30th in the afternoon, her veterinarian and accompanying nurse assisted Greyce in finally getting the peace she so richly deserved. She died in the back garden, in the sunshine, surrounded by trees and grass and the ones who loved her dearly.

It has been a pleasure to assist Greyce in providing advice to troubled cats and their purrsons. While our success rate was not 100%, it was heartwarming to receive progress e-mails and learn that in many cases, her advice made a positive difference to a cat in need. Greyce would suggest that in all cases, the cat was purrfect but the purrson needed work.

So feline readers, take heed: Give your purrson a whisker kiss and a special purr, in memory of a truly remarkable cat. Of course, your purrson is most welcome to reciprocate with a tasty treat or a pinch of catnip. Greyce would certainly approve.

Posted by I am Precious Greyce, Cat Advisor at 9:22 AM 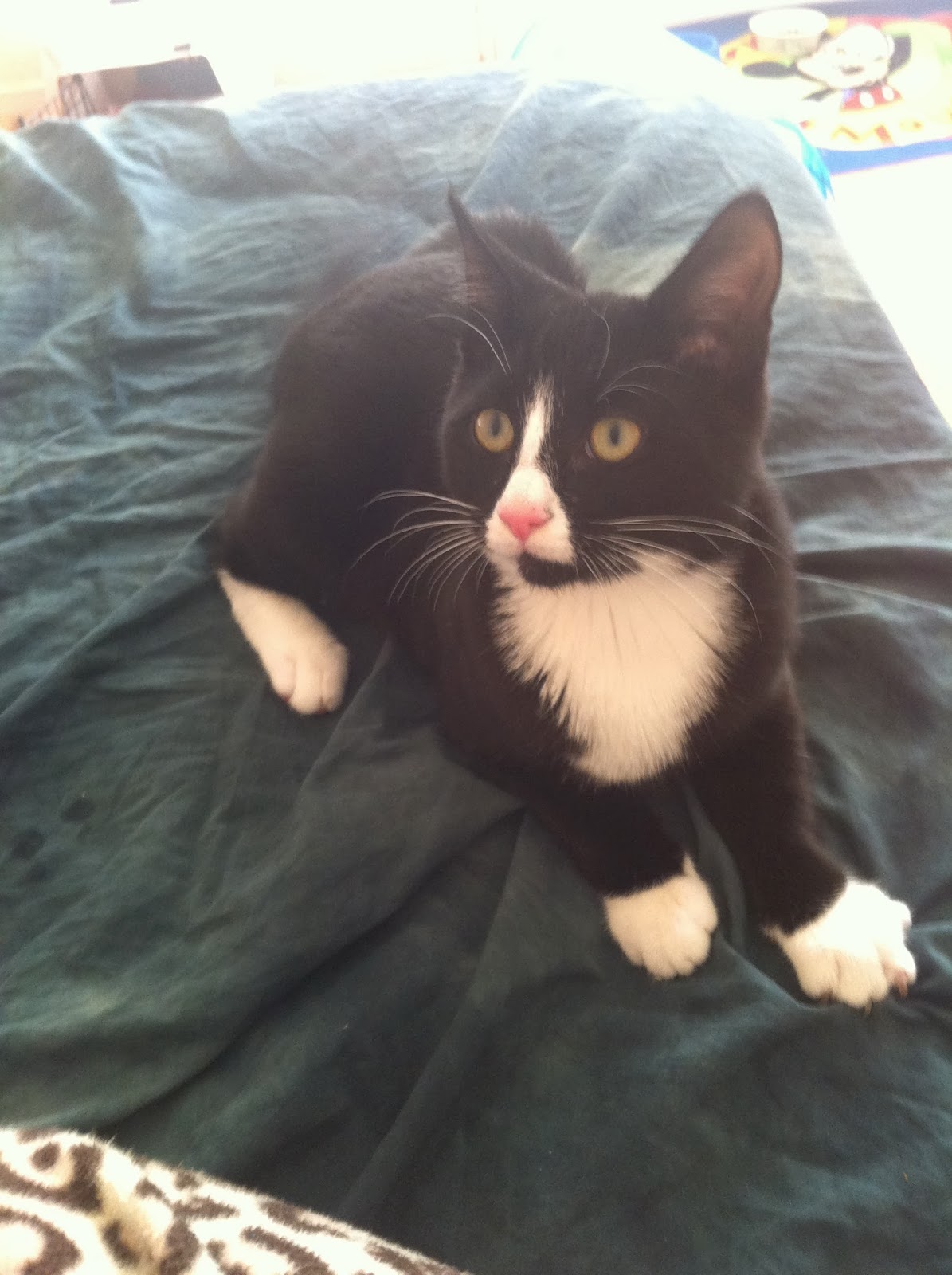 I am a seven-month-old neutered male kitten who is quite endearing, as you can see in my photo. Since I was eight weeks old, I've lived with Herself and her parents. And I stay indoors.
Herself is away at school during the day, but the folks are around.

I have many toys, my favourite being a tin foil ball which I love to chase after and fetch. No matter how much she plays with me, I still want more! In an effort to curb my energy, they tried to get me a playmate but that didn't work out: the girl cat had a difficult time adapting and so now lives in a new home. Now the folks would rather that I remain an only cat.

They are getting annoyed with what they 'see' as my destructiveness. I scratch walls and doors. Sometimes I nip my purrsons.


Now Herself is thinking of confining me to her room when she is away during the day, in an effort to keep peace in the house.

What advice do you have for me?

Read more »
Posted by I am Precious Greyce, Cat Advisor at 10:38 AM

I am one-year-and-a-quarter years old and was adopted about three months ago along with my sister, Chaplin. We look a lot alike except she has long hair while mine is short.

We lived with a cat hoarder and were not used to people. After we were rescued, we stayed in a shelter and were then adopted. Now we live in a home with Himself, Herself and their baby. The latter two are home most of the time.

When we arrived in our new home, Chaplin was skittish and I was terrified so whenever anyone entered the room I was in, I ran and hid. Thankfully Themselves have been very patient and have respected our need for space. Chaplin is now an attention-getter but I still don't want to be touched. I will play with people as long as there is no contact.

I let Themselves come within inches of me and no closer. Once, Himself was able to pet me because I wasn't looking and thought Chaplin was touching me. She and I are inseparable. I sit wherever she is and I no longer hide as much. And I prefurr to be down low (nearer the floor) rather than higher up.

We free feed on dry food. Food doesn't really excite me although I will sometimes take treats.

My lack of desire for physical contact with purrsons bothers Himself very much. What can I do?

Read more »
Posted by I am Precious Greyce, Cat Advisor at 12:30 PM


Thank you so much for your sound advice. Herself purchased wet food for me and I LOVE it! I could eat that stuff all day.

And I have plans for a treat ball - for my kibble.

She insisted on taking more than one photo of me - even a side view which is less that flattering. However I am hopeful that I will now be in a position to shed some of my extra poundage and become even more handsome than I already am.

I will keep you posted.
Mihijo


Dear Mihijo,
Glad to hear that you are know eating yummy stuff.  I wanted to show you at your most handsome in this entry and so I have inserted the other photo in the past entry (Advice for Mihijo, posted 9/19/13).

Keep up the good work!
Greyce


Posted by I am Precious Greyce, Cat Advisor at 8:27 PM

Tyrone the Cat Gets More Advice on Living with a Puppy

I promised to advise you further about dealing with the new puppy who will soon become a part of your household.

In my last entry to you (published on 10/3/13), we reviewed:
- Getting you used to puppy sounds and smells in advance.
- Getting your folks up to speed on what it takes to raise a puppy and how to decode cat talk.
- Paying special attention to making sure puppy understands that you are much higher up in the family hierarchy, so you will be treated with respect (and be safe).
- Moving your food and water to a place puppy cannot reach.
- Bringing the kennel that puppy will sleep in into the master bedroom now so you can get used to it; locating it in a way that still makes your favourite sleeping spot accessible and safe for you.
- Using Feliway to enhance your sense of calm.
- Putting a puppy barrier to block access to your litter box so you can use it in peace.

Read more »
Posted by I am Precious Greyce, Cat Advisor at 8:40 AM