Cat Companions are Back to Being Friends: Re-integrating Yoshi & Taro 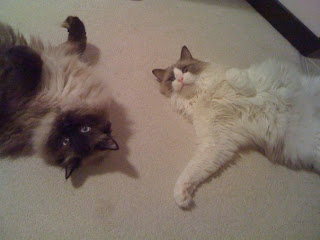 Remember us, your dear friends Yoshi and Taro whose friendship had soured after a trip to the groomer? (see Friendship Gone Sour 8/26/10).

Well we followed your advice on getting re-introduced (See Using Harnesses to Re-introduce Companion Cats 12/20/10). We had been doing pretty much what you suggested. Our humans were good about stopping our re-introduction sessions before any anxiety or aggression would start to escalate. And over time, we got more and more used to each other. And so the intervals between which they had to stop the sessions got longer and longer.

And now things are pretty much back to the way they were - before that dreaded incident caused havoc in our household!

For the past few days, the bedroom door has been wide open all night so we can have unrestricted access to each other while our purrsons sleep. From time to time, we'd chase each other and wrestle. And we both take turns initiating play. But most of the time we each do our own thing and are not too preoccupied with what the other is doing.

And the greatest new of all is that Taro is no longer obsessed with following and stalking me!

Our purrsons now have a new complaint. The became used to quiet nights with one cat sleeping next to them in the bedroom. Now we keep them awake as we run through the house. Neither of us is interested in night-time cuddles. Ha! Ha!

With thanks from Yoshi (and Taro, too)

Congratulations Boys!
This is a job well done. Time to have a catnip party in celebration.
Best,
Greyce

Posted by I am Precious Greyce, Cat Advisor at 12:38 PM