Continued Urine Marking and Peeing on the Bed is Just TOO Much!

I’m urine marking and peeing outside the box, yet again. I’ve marked towels near the door and in the kitchen, pillows on the bench by the door, picture frames, Himself’s desk, slippers, the microwave and the stove. I’ve also peed on the stove, the dining room table, and the spare bed.


You remember that I used to be a great stove marker and pee-er in response to the stand-off that my sister, Bailey, and I would have in the kitchen. Mom has left the stove covered with cooking pots and pans to discourage me and it usually works. One time I decided to fill a frying pan with pee; she has since replaced that pan with a tall covered pot. And she doesn’t have the courage to remove all the stuff and see if I will ignore the stove top. (I think she is smart about this, because that stove top really tempts me.)

What is concerning Themselves most is my wish to use the bed in the front bedroom as a urine depot. Mom has now covered the front bed with one of those plastic ‘thingys’ you get at a linen store (she did that before you wrote your article about the shower curtains). Out of desperation, she placed a litter box on the bed in the spot that I like to pee on. She put a large green plastic bag under the litter box to protect the bed linens. I decided that I liked peeing on the bag instead of the box. I’ve done this twice now. She’s okay with that - not thrilled; but it is easy for her to fold up the bag and toss it out - far easier that massive washloads.


When I decided to make a deposit in that box, Herself seemed happy about that. Humans are so odd about these things. And even more recently, she moved the box to beside the bed. Now that our bedroom box is on the floor I use it almost daily.

I still continue to use our original upstairs litter box fairly regularly. Herself is beginning to wonder if I have just been expressing a need for a ‘really clean’ box. Though I think we all know that there is more to it.

While my problem is sporadic throughout the year, the month of October seems especially troublesome.

﻿
﻿Other than that, life remains about the same. My sister, Bailey, and I continue to be friendly siblings most of the time. She still bullies me on occasion and I will go after her when I’ve had enough. That said, 10 minutes later we’ll be curled up in each other’s arms for the next several hours.

Any further advice you can provide will be appreciated.

I always thought you were a sensitive cat and you have proved me right. You are one of nature’s delicate beings and it seems that when your inner harmony is the least bit off balance, you get the need to express it through urine. Now if you were able to use paint (and a brush) instead, your creative expressions would be worth a great deal of money. You could establish a purrsonal trust fund for unlimited toys and catnip! Alas, such is not the case.

As you know, marking of the kind you mentioned is usually a response to a specific stressor. Many of the items you have mentioned were/are in locations where it would be possible to feel invaded – the front door being a prime one, especially if a roaming cat is about. I continue to encourage your purrsons to check the outer front door for any urine marks and to use a urine cleaner with a cat repellent to discourage outside visitors, if warranted. (Or try Stink Free – which I’ll explain later.) Of course, some of the locations you describe are near windows and since I have not had the pleasure of visiting your home, I can’t offer much advice in that respect. If there were just one or two locations, we could do something to block visual access. But your locations seem to vary too widely for this to be practical. Enough said.

From what I gather, your folks are resigned to dealing with urine marking. It’s the bed peeing that really gets them. Yes beds are wonderful repositories of smells, even if Herself has worked hard to clean them out. The idea of placing a litter box nearby is an excellent one and seems to agree well with your prefurrences.

As for the really clean litter box: you may be very fastidious and thus require excellent service in this regard. I also recall that with your prefurrence for smooth surfaces, you didn’t like a lot of litter in your box (hence the need for very frequent cleaning). At some point you might also consider trying compressed newsprint litter (Yesterday’s News is one brand) because many cats who like soft surfaces for urine deposition find this satisfactory - although their purrsons find it far less convenient regarding clean up.

﻿﻿
﻿﻿ To assist you further, I consulted with Bud from Brandon, an excellent cat who, like yourself, has a tendency to use urine to express his anxieties and displeasure. He makes the following suggestions.

1. Bud notes that the biggest improvement is when his purrsons respond by giving him more play time and considerably more attention. The makes the biggest difference. I mention this because you were kind enough to send me calendars recording your exploits and I noticed some patterns.

May, one full bladder incident on the stove.
June: Another stove incident and two small markings elsewhere.

July: A week with three incidents, possibly related to the presence of a raccoon in your yard. The feeling-invaded hypothesis would prove out here.

August: The spare bed starts to become a preferred site. And the frying pan on the stove top. Twice that month Themselves went away (for the weekend). I wonder what pet sitting arrangements were made and how this might relate? And do you still have a litter box in the kitchen? I know you used to use that quite well, in lieu of the stove top. 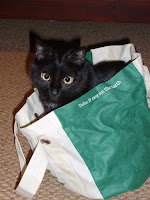 September: Starting around the 17th with four incidents in the month, two at the end of the month, leading to two more the following week (October). I do think that this is your attempt to deal with the transition as Herself returns to teaching. Once humans get immerse in their work schedules and once household activity patterns change as a result, you are likely to feel somewhat anxious – and you can only hold out so long. It may also affect Bailey and lead to a rise in her bossiness while the folks are away. Given that, a review of play time and attention schedules is in order. Purrhaps a new toy (even putting some of your toys in a plastic bag with catnip – to marinate and to be removed from view for a month and then bringing them out again is a great idea. And I see that you adore new bags!

2. Bud has developed a fondness for a relatively new cleaning product called Stink Free which is available at pet supply stores. His purrson raves about it because it is easy to use and she says it passes the ‘scratch and sniff test’. In other words, there were problems with some other products used in Bud’s household because while they initially seemed to work, in time he would go back and scratch and sniff and then pee again – indicating that total cleanliness had not been achieved. So if you need a cleaning product for soiled items, you might give this a try. There is a demo video which is worth watching to know how to use the product (Stink Free Demo).

3. While the garbage bag worked well for you, do consider investing in a urine pad – the kind sold for adults who have problems with incontinence. They have a waterproof backing but are heavily quilted on the top, making them soft. They are even comfortable to sleep on (something of which I was not previously aware). However their biggest selling point is that urine is easily seen on them (they are white) and they just get thrown into the washing machine. Just a possibility.

4. At Bud’s household they use Feliway diffusers on a regular basis to help mediate anxiety levels. But then, in his household there are three adult cats, two kittens, and two elderly dogs with special needs. It’s a thought, at least in the room you feel the greatest need to pee outside the box in – if you get my drift.

Of all of Bud’s excellent advice, I strongly recommend Item 1 in your case.

Let me know how things work out for you.

Posted by I am Precious Greyce, Cat Advisor at 10:03 AM