Hi Greyce,
I have another question for you. As you know I get VERY VERY anxious when I’m dealing with something new. I get VERY spooked and the effect lasts for a LONG time.

You mentioned that I need to work on becoming more resilient. I plan to take Star of Bethlehem flower remedy. What else do you advise?

I want to give readers a small bit of background first: In our first written contact (which I did not share with readers), you were terrified of the treadmill. And I mean, TERRIFIED. I instructed Themselves to stop using it and cover it up. And it took you a lot of time to even go back near it and try to explore it – even though it has not been used. I’d also suggested a flower essence to help with your resilience – and I’ll get back to that later.

Principles for Introducing You to Something New

Let me review the basic principles of introducing a cat to something new, particularly a cat such as yourself who is anxious and has not been used to what would be termed “normal household items” in your world.

2. Slowly means at your pace (NOT your purrsons’).

3. If the pace is too fast for you, you will show it – usually by dilated pupils, fur standing on end, pacing, cowering, trying to hide, etc. If this happens, they MUST stop; back the process up a bit and proceed even more slowly from there.

Why New Things Can Be Scary

As you know, your territory is the most essential element to your well-being. And you need to explore it, patrol it, and scent mark it on a regular basis to reassure yourself that it is in good order. Changes to territory signal to us cats, a potential change in our resource base; and the mere thought of a sudden lack of food, or water, or safety is enough to send even the most assured of us into anxiety-mode.

When a new thing enters your territory, you need to have the chance to adapt to it and incorporate it. In other words, you need to make it your own. That way, it becomes a part of your normal territory rather than something to get worried about.

The thing most of us cats find most bothersome about appliances and electronic items is the noise they make. Other than the dreaded vacuum cleaner, most of these items stay in one place so we don’t have to worry about them chasing us.

Getting Used to a New Small Appliance

Suppose the new appliance is a blender. I doubt that you will be using it to make your own mouse shakes. Purrhaps you are not even allowed on the counter. However if the appliance is portable and there is a chance you will encounter it, I recommend the following:

1. Get used to the box it arrives in, before it is unpacked. First, put a spritz of Feliway spray on all four sides of the box and wait a few minutes before you encounter it. That way the Feliway will have had the chance to do its job. And when you meet that box, it will smell familiar.

2. Once you are used to the box (no longer react to it) – and this may take a short while or maybe even more than a day - they can unpack it. You can watch. That way you may even get to play in the box from which it came!

3. When ‘the thing’ comes out of the box AND IF it is safe to do so (remember Feliway is flammable), they can give it a spritz of Feliway. Again they need to give you a chance to explore it – assuming it is safe to do so (that is, that it is not something which sharp bits you could be hurt on, etc.) That is more than enough for one day thank you very much.

4. They, of course, will want to operate it. Assuming it makes a noise, I suggest they take all necessary precautions which means they have to introduce you to the noise is makes VERY SLOWLY.

The first time they operate it, you need to be in another part of the house. If it is upstairs, you should be downstairs with the door closed. This will muffle the sound.

Someone should be with you to monitor your reactions. I don’t advise that purrson to hover over you like a clucking hen, all worried, or you will worry too. Instead that purrson should be in the same room as you are, either playing with you, petting you or purrhaps just reading or watching TV.

The other purrson should start the appliance BUT only for a FEW SECONDS and then stop. Your monitor can be on the lookout for any stress reaction: dilated pupils, fur standing up, cowering, attempting to hide, etc.

Assuming there is little or no reaction, they can then proceed to the next step – which is to repeat this LATER – at least one hour later. They can try this say, up to 3 times a day, with at least an hour (if not longer) in-between.

Assuming you are okay with this, then the next round (the next day or in a few days) could be to increase the length of the sound – say from 3 seconds to 5 seconds.

The idea is to repeat the sound, with a goodly interval (at least an hour) in between, and to SLOWLY increase the period of operation.

Once you are okay with the noise and they have reached the normal length of the thing’s operation, then they need to repeat the whole process with the door open (between floors) so you can hear it better. Again they start with a few seconds of sound and a long interval of rest; and slowly work up.

And if you have the courage to be on the same floor as the thing when it is operating, then they may need to repeat the process again.

B) Getting Use to a Recording of the Thing in Action

This option may be easier for your purrsons to implement IF they have a tape recorder or whatever modern piece of technology these days does the same thing. Basically they can record the sound and then play it to you.

Just like in hearing the actual thing in operation, someone should be with you to monitor your reaction (and to distract you if they can).

Start with the lowest possible volume. Stop it at the 3 second spot to begin with. Slowly work up the period of exposure – at low volume. In other words, just like with the other methods – start with 3 seconds of sound up to 3 times a day at intervals that are at least an hour apart. As you adapt, they can slowly increase the volume and the length of the interval.

The key to all of this is to take it at your pace. They must monitor your reaction. If you do not appear to be bothered, they can continue. If you are bothered, they need to go back a step and proceed more slowly.

In either case: they don’t have to work with you on this each and every day. I assume most such appliances wouldn’t be operated on a daily basis anyway. And I don’t want you to get used to a particular time of operation and then start to expect to hear the sound at that time.

You had also mentioned the use of a flower remedy. I know you had used Rescue Remedy (also known as Five Flower Remedy) before we consulted and I’d suggested Star of Bethlehem. 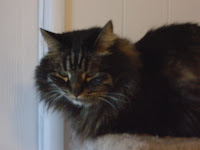 I have seen many (but not all) cats who have taken such remedies become more resilient. The cat who best shows this is my friend Christmas Blessing (shown in the photo). He was terrified of many things. After over a month of taking Star of Bethlehem he became much more resilient.

Flower remedies take time to work, so don’t expect that a few drops of the stuff will suddenly give you the courage to face the noise. I had suggested the remedy largely to help you recover from the traumas you had endured in your past life, in order to help with your resilience.

In any event, let me know what appliance you need to get used to and how it goes.

And when it is to be the dreaded treadmill, let me know BEFOREHAND and I’ll tweak the plan with some specific, essential details.

Posted by I am Precious Greyce, Cat Advisor at 7:00 AM