Dear Greyce, I would like to ask a question on behalf of Herself. But first, I want to remind you of my history, just in case you forgot. Your last entry about me was Bear-y Good News (4/1/10). 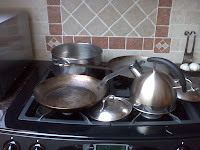 As you know I used to pee on the kitchen stove because my sister, Bailey, and I would have tiffs there. She’d be high above the cupboards and I’d be on the counter by the stove having an argument. And I’d pee to mark my spot. You suggested that Herself cover the stove elements with pots to discourage me and to keep me and the stove safe. You also suggested I get a litter box for the kitchen. Here is what the stove looked like after taking your advice.

The good news is that I have not peed on the stove since early February. I use my kitchen litter box on a regular basis (and also use the other one that is elsewhere). Bailey and I have stopped having major arguments because my folks followed your advice about playtimes and learned about cat body signals so they could intervene before things got out of hand. We do have the occasional squabble on the floor (rather than with one of us being up higher than the other) but they are quite minor and we are soon back to playing again. And I no longer prowl and yowl throughout the night.

So now my purrson would like to remove the pots from the stove. She did remove some parts but is afraid that leaving the stove bare might inspire me to revert to my old ways. What do you advise?

Dear Bear, Congratulations on your excellent progress! I am very proud of all of you. To help your purrson as well as reader, I am posting the photo of the stove as it now is. 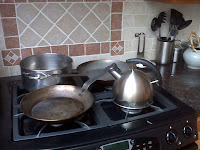 I can understand why Herself might be concerned about removing the pots from the stove. However as you said yourself, the stove has been pee-free for months, your relationship with Bailey is on better footing, and your both are receiving more stimulation to keep life interesting. So I say, go for it!

I know humans are reluctant to, even when I say that. So let me offer a suggestion based on the photo you sent.

Tell Herself to remove one item at a time, starting with the pan on the back, right burner (on the picture I am showing). A few days later, she can remove the pot from the back, left burner. Let her leave it like that for a week, just to assure her. Then she can remove one item from a front burner and a few days later, the last one. She can just do the removal in the course of normal kitchen clean up, not making it the focus of household attention.

I know that sensitive cats like you, Bear, may revert to your old ways when you are under stress. Should that happen, you and your folks now know the measures to take to help you out. And if you get stuck, just send me an e-mail and I’ll do what I can.

My colleague, the late Venus who was the queen of stovetop pee-ers would have bouts when she got anxious. And if her purrson didn’t notice in time, then the stove would be anointed again. She taught her purrson to implement the action plan when that happened: the stove was covered with pots, the litter box was installed in the kitchen (she had removed it, but I your case I think it best to keep it for you), and she gave Venus more attention and play (which was a bit of a challenge because there were up to seven cats in the house). As soon as the plan was implemented, Venus calmed down and in time, the pots were again removed and things went back to normal.

So Bear, I have every reason to believe that a bare stove will not lead you astray at this time. But do let me know how it goes.
Posted by I am Precious Greyce, Cat Advisor at 10:46 AM