Cat Pees Over Side of Box: Celeste's Problem


My photo says it all. I am lovely and quite beautiful. Frankly I bring joy to my folks - 2 adult humans with whom I live in a quiet household.  I am a 5-year-old spayed and declawed calico only-cat.


My problem is with my litter box(es). I sometimes pee over the side, rather than in the box. And this is bothering my folks.


Here is some background.


I live in a house with a basement. In the basement is a nice bathroom that has become my safe place. I have a nest of blankets and towels in a bed on the counter beside the sink. Before bedtime, Themselves put a set of cat stairs by the counter to make access easier for me. These stairs stay just outside the door during the day. I have a box with an insulated blanket on the floor, a bowl of water in the bathtub that is refreshed daily, a toy with a ball that goes around a track (which I love), and two litter boxes.

I let my purrsons use the toilet and sink. But they never use the bathtub or shower here.


I enjoy this room very much. I have slept in it since I was a baby. I loudly tell my folks to put me to bed, make them follow me to my room, and cry very hard it they do not. In the cold winter months when looking outside is very boring, I spend a lot of time sleeping in my napping box here.

I have two litter boxes. In the photo, the one on your right is 22 x 16 inches and the other is 14 x 16 inches. They are located against the wall on either side of the toilet. I use Yesterday's News original, unscented, compressed newspaper litter, a kind I've used since I was a kitten. My boxes are carefully scooped twice a day and completely cleaned and changed each week.


I squat to pee. I like two spots, one at the back of the box and one near the front. I circle a bit and then squat, sometimes with my tail outside the box. I leap out of the box when I am done and flick my paws to get rid of any excess litter.

But now I pee just over the side too. It is like I miss the box because there is also pee on the edge of the box. Sometimes it is a little pee and sometimes a lot.


Greyce, I was purrfectly happy with the old, one-box arrangement and used it successfully for years. I am also happy with the current arrangement. But the peeing over the edge does distress my folks. How should I solve the problem?

There are many reasons a cat may develop habits that humans do not like when we use the box. In your case, you used the box in a way that pleased your humans for several years. Then something happened.

IF there was no change in the original arrangement of that large box, then my guess is what happened was those crystals in your urine. Sure it was a small amount and not truly bothersome. But is could have bothered you slightly, and caused you to feel the need to raise your hind end rather than completely squat when urinating.

Or the slight irritation could have resulted in a need to mark the area with urine to relieve your anxiety over the sight discomfort. As you know, many of us use our boxes both for urination and for urine marking - though most folks don't realize that. Marking would cause you to raise your butt and the urine would go over the side.

From the evidence your present, I think you are raising your bum slightly when you pee now, and so the urine goes over the side. Yes sometimes it stays in the box, IF you are positioned in such a way that most of you is inside the box and there is still a bit of room between your butt and the edge. But let's get real, here, Celeste: The way your litter boxes are arranged, you hardly have room to adequately get in and out, let alone use them properly.

My dear, you need a feline interior designer. Perfurrably one who specializes in cat bathrooms, because it's
all in the details. Where litter boxes are concerned, a cat has several needs. The ones relevant to your case are as follows:

- proper positioning of the box relative to the entry just so you can see an invader in advance. Your folks may argue that there are no invaders. But just try and tell that to us, who still behave (in many ways) as if we were in the wild. I bet you prefurr to use the back end of the box (the part that faces the back wall) because then you would be facing the entry and could watch for the enemy while you are in a vulnerable position.

- space of at least 6" (or 8 cm) around all sides so you can walk around it. We cats like to walk around the box before getting in, to assess the situation and locate a suitable area within it. No point in stepping in a wet spot!

According to what you wrote me, your space is far too tight. For the larger box, you have 2" (5 cm) between it and the back wall, only .75" between the box and the other wall, and you have 6.25" between the side that faces the toilet (but I'm betting that's a box-to-toilet-bottom measure and, if so, the curve of the toilet bowl would tighten that space, if you were to hang your butt in that direction).

So here is why I think you are going over the edge:

a) You have two boxes, both of which allow you to see the main entry to the room. That's good. You NEVER pee over the side that faces the open area of the room because no self-respecting cat would ever orient herself in such a vulnerable position (back to the entryway). In other words, from the point of view of waste deposition it is unused.

b) So if you feel that your favoured side (the one facing the back wall) has been used, your next logical option is one of the sides. But because you only semi-squat and there is not enough room between the end of the box, the presences of an obstacle (wall or toilet bowl) and your butt AND your tail, gives you no choice but to pee over the side!

Celeste, we are in a tight spot here, so I'm going to offer some options and you can try each one for a few days and see what works best for you.

1. At the moment, your larger litterbox is oriented so that the longer sides are parallel with the back wall. I want you to rotate the box 90 degrees so that the shorter sides are parallel with the back wall. AND I want you to move the box a good 6" away from the back wall. This will allow you to continue to orient yourself (with respect to the entry) in the proper feline way, but give you enough room within the box (because you will be positioned lengthwise rather than width-wise) with the extra safety of a decent space between the edge and the back wall. Give yourself more space with the sides too. From my calculations, you have about 29" from the side wall to the base of the toilet. If the box is turned, only 16" of it will take up room. You will have 15" let over to be divided on each side; that should give you a lot more room. 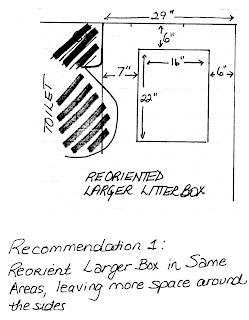 Don't do anything to the smaller box at this time. Just make sure that the edge of it that faces the back wall is at least 6" from that wall.

It's unclear to me which side of your smaller box is facing the back wall: the 16" side or the 14" one. Later  you might want to re-orient that box too, to get a couple of extra inches on sides. But not now.

2. If the re-orienting of the larger box doesn't work, I'm going to ask you to move your box as shown in the diagram I have prepared. 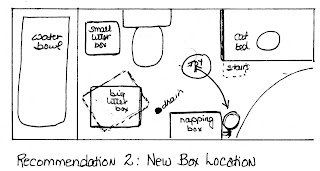 Yes, it means moving your napping box and beloved toy nearer the entry. Keep them as nearby as reasonably possible, without being on top of the litterbox. Frankly no one ones to play up against their own toilet.  We can deal with the eventual final placement of the napping box and toy later.

Try it parallel to the wall. Try it at an angle - but still with the width side allowing you to position yourself with respect to the entry. I cannot be certain of the exact location because I'm not sure how much room that leaves you to get to your water and/or to get to the other box. And you don't want to put it over the floor drain.

If push comes to shove, move the other, smaller litter box out of the room for now. (Again, if you get to this stage we will need to talk about your housing layout to find a suitable place for it - because I really think you should have two boxes if at all possible.)

3. If that doesn't work, then you will need a box with higher sides. For this I'm going to refer you to Keko's entries. You may be reading about Keko, a delightful Bengal cat with anxiety issues because of major schedule changes in her household. She, too, pees over the edge of the box (though her reason for doing so is not at all likely to be the same as yours.) So be on the lookout this week for an entry of a similar title to yours (Cat Pees Over Side of Litterbox) but allocated to Keko. It will be posted on July 12th (2012).

Pay attention to the advice about either acquiring that much larger box by Whisker City or to making your own high-sided box. A roomy, high sided box (without cover) is often all a cat who doesn't want to or cannot fully squat may need to pee, to the satisfaction of the humans with whom she lives.

I'm very hopeful that one of these options will work for you Celeste. Do the easiest one (i.e. #1) and then just work from there. And do keep me posted.

Here's to peeing within the box, every time and all the time!

Posted by I am Precious Greyce, Cat Advisor at 2:14 PM