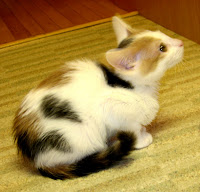 I am a petite, adorable calico with a piercing meow and demanding nature. I like attention. A lot of attention. And I tend to be on the anxious side.

My purrsons decided to go away on holidays. This was my first time as a home-alone cat, for my long-term feline companion left her physical form in December.

You can imagine how I might feel, being left in the dead of winter with only the furnace for company!

But it wasn’t all that bad. I had thrice daily visits (of at least an hour each) from two cat-loving servants whose job it was to attend to my every need. One in particular took it upon herself to entertain me – a bit of a challenge because I’m not really ‘into’ toys.

Somehow, she found things I liked.

I understand she was trained by you.

Could you pass along your entertainment tips? I'm curious.

I take great pride in having trained Herself to be an attentive and obliging cat caregiver.

Before her first visit to you, she was told that you don’t like to play. In my experience, attention-seekers like you love human contact. And that can be met in one or both of the following ways: interactive play or touch. So I challenged her to find some way of making the days fly by for you.

Herself’s first duty was to learn your meow code, that is, which meow meant “I want to play” and which one meant “cuddles please.” She soon got the hang of your prefurrences: a Reiki (touch therapy) session seated on her lap first until you were fully sated with human contact; then some play; followed purrhaps by more cuddles.

The cuddles were a piece of cake. You directed her to the chair of your choice, she sat down and you climbed aboard. Her hands went where you directed them. And she tells me she really enjoyed your purrs which caused your body to vibrate so much that she could feel them through your paw pads!

Finding the right toys for you was more of a challenge. She knows that adult cats tend to prefurr interactive play.

You used to be a laser pointer cat but now I understand it doesn’t do a thing for you. Me neither. I finally figured where the light was coming from so I don’t bother following it. Frankly I got disgusted that I never could catch the darn light beam and now it doesn’t seem worth the trouble.

She thought your fishing pole toy would do the trick but you showed absolutely no interest. “Don’t give up!” I told her. And she took my advice.

She brought over some of my fishing poles and they did the trick. Why? Well she soon discovered two things: first, you are a string cat – a lover of long, thin pieces of material. You’d follow that anywhere. But since you also liked to bite at them, she had to watch you carefully and store the toy where you couldn’t get at it without supervision. No point in a vet emergency if you swallowed the string.

Second, she’d figured out the problem with your own fishing pole. It had feathers and feathers just don’t do it for you!

The other thing she reported is that you really went for my wand toy – a long wand that had only two emaciated feathers left on it, but also has a functioning bell and many coloured streamers. You are a streamer kind of girl.

﻿As the days went on, I suggested she take over my cat tunnel so you could run through it to catch the wand. At least it broke up your routine.

It was then time to test your basket of toys. You had an abundance of balls of various sizes and weights, some honeysuckle (or was it catnip) pouches, and some toy mice. None of these were of any interest to you whatsoever.

Obviously you are a cat who thrives on interaction, NOT solitary play.

So where you purrson returned, Herself briefed her on your prefurrences. And lo and behold, you refused to play with her!

I guess what you meant is that you have your own prefurrences: You see my Herself as a suitable interactive play companion and an okay cuddler, and your Herself as your cuddler of choice. You’d really rather sit on her lap than have her cast the fishing pole.

And thank you for returning my purrson. She is back in my home attending to my every need - just as it should be!

Thanks also for the compliment on my training skills. It always takes Herself a while to catch on, but she does eventually get it.

Good luck with the continued training of your purrson,

Posted by I am Precious Greyce, Cat Advisor at 3:56 PM