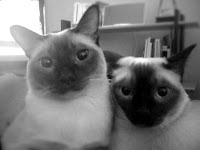 Dear Greyce, Remember us? The Tonkinese who started to fight after seeing an invading cat (Tonkinese in Trouble - August 5, 2010)? Well we took your advice and it worked!

Within day of the dreaded incident, we had gotten to the point of being fine together – sleeping together, grooming each other, eating together - as long as we were not near the scene of the crime. Then you suggested that we get desensitized to that area.


To help us, you advised changing the sensory cues in the area so it might smell, look, feel and sound a bit different. Our purrsons put a textured mat over the smooth floor by that screen door where the invading cat was seen. They installed a Feliway diffuser so the place smelled different. And they used waterfall sounds to mask any auditory cues that we might hear. They also blocked off part of the area so we would only have a bit to manage at a time.

We came down to the redecorated space together, on harnesses. Everything was great. We ate some dry food, walked around, played with the laser pointer and even played chase up the stairs. Then I got a bit scared when Ukko re-entered the space after being out of eye shot for a minute. I hissed and was taken to my safe room to calm down.

From then on things have gotten much better. We have been on the main floor without incident. And we are back to expressing out brotherly love with lots of play fighting, mutual grooming, and sleeping and eating together. 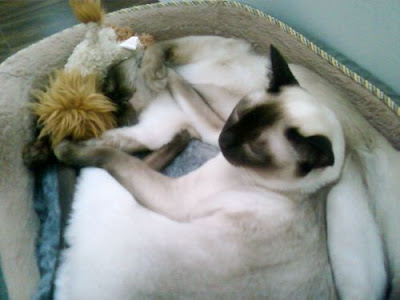 As you can see from the photograph, we like to touch paws, too. Our folks will still keep a careful watch over us for the next while, but peace has been restored.

Ukko and I say, "thank you, Greyce" for helping us get back together.

I always say that it takes a cat to help a cat - in this case, two cats. Redirected aggression is a serious issue - as the two of you found out. You were lucky that you have such concerned and cooperative folks who e-mailed me quickly on your behalf.

It has been a pleasure to get to know you and even more so, to know that I have been able to help.

Posted by I am Precious Greyce, Cat Advisor at 11:07 AM