Hampered by a Four-Paw Declaw

Dear Greyce, We are two adorable shelter graduates who get along well together and have recently consented to join a new home. Our new purrson, however, was surprised to find that all four of our paws (for each of us that is – yep, eight paws in all) have been declawed. We’d love a cat tree but she is afraid to get us one for fear that we won’t be able to climb it. What do you think? Could you please advise on appropriate cat toys as well? We are biters and need a little something on which to work our frustration. Just let us know what to do and we will ensure to aim her credit card in the right direction! Your Feline Fans in Michigan

Dear Fans, It’s always gratifying to know that I have an extended fan base. It does wonders for the ego on down days, like the last several during which it has rained and rained thus preventing me for lying under my favourite juniper in the backyard. What’s a cat to do? I’ve spent them dreaming of sunshine while napping on my favourite office chair!

While I’m delighted that you have found a new home I, too, am distressed by the state of your paws and before I go any further I feel the need to alert readers about the situation. So please be patient with me, while I put your problems in context.

Declawing is amputation. I don’t like it. I am very much opposed. Usually if it is done at all, it will be done only on the front paws (largely because those are the paws with which we scratch mark human furnishings or purrhaps, from time to time, scratch bothersome people). But I am not a fan of declawing, even though it is a common practice throughout North America. And even though I have colleagues who no longer have all their claws and seem to have adapted quite well, I still think the procedure stinks worse than dog breath.

Unfortunately many humans have other opinions usually based on ignorance, their own perceptions of convenience, or differences in philosophy. Let me explain.

Ignorance – Part 1: Some people don’t know why we scratch things because they have no understanding of feline communication and marking systems. As you know, scratching is one piece of our territorial marking tool kit – a natural feline behaviour having nothing to do with intending to destroy furniture. Even declawed cats go through such marking motions to deposit scent from their paw pads.
Ignorance – Part 2: Some people just don’t know what a declaw is. They think it’s the removal of our nails when it is actually the amputation of the first joint of each of our digits. I’ve always wondered how they’d react to the suggestion that they amputate the hands of their loved ones to prevent them from getting into mischief. A declaw procedure involves all the risks that any surgery would: pain and infection; and some of my colleagues have even had an allergy to the glue used to keep the wounds shut (which required yet another surgery to fix).

Perceptions of Convenience – Part 1: Many people don’t want to take the time and trouble to learn how to train us away from their so-called valued objects and toward the use of a proper scratching post. Some are too cheap to buy a decent post but mostly, I’ve found, they just don’t have what it takes to entice us to use it properly. I fear for their raising of human children as a result but that is another matter entirely. Somehow they think that declawing is the easy way out.

Perceptions of Convenience – Part 2: Some vets (don’t get me started) offer cheaper packages if declawing is done at the time of your sterilization. Even if a cat doesn’t have a so-called scratching problem, such vets will suggest declawing as a preventive measure. That’s about as humane as suggesting that children be sterilized to remove the risk of pregnancy before marriage!

Philosophy – Part 1: Many people place a high value on material objects. In many homes, the first time we run our claws down the living room sofa results in the booking of a declaw surgery with the local veterinarian. “No cat is going to ruin my $2,000.00 sofa!” they exclaim. I wonder how they will react when their kid throws up on their $500 duvet; or better still, rams their BMW into a lamp post? On my most cynical days, I figure they’d get rid of the kid – if only the law would allow it.

Philosophy – Part 2: Did you know that declawing is illegal in Europe? A veterinarian who would purrform such a procedure would lose his or her license, unless it could be demonstrated to be in the best interest of the cat. Organizations opposed to declawing include the American Society for the Prevention of Cruelty to Animals, The Humane Society of the United States, the Cat Fancier’s Association and the Royal College of Veterinary Surgeons (Great Britain).

Okay, I think I’ve done my bit to convey my distress about declawing in general.


The Four-Paw Declaw
Now I get to deal with the four-paw declaw. Such a procedure is abhorrent. Herself was asked at least once in her career as a cat behaviourist to advocate it. The case in question involved a delightful cat who liked to jump on furniture. And since the furniture in his home was leather and the people were very house-proud, they hated the fact that he needed to dig his claws into the leather (because the surface was so slippery he needed to use his claws to keep his balance). She recommended they get used to distressed leather furniture – a look that is valued in some decorating magazines. They were not amused. Bottom line: I cannot for the life of me think of one good reason why a four-paw declaw would even be considered. And a veterinarian who would perform such a surgery is beyond the pale!

Let’s look briefly at the behavioural issues involved. While they may be part and parcel of any declaw, they can become even more so with a four-paw declaw:

-  problems with gait and balance that may prevent you from walking, running, chasing, leaping or playing - all of which are important aspects of your behaviour. Problems with gait include joint stiffness and possible arthritis because the toe tendons cannot be extended; you can always suggest that the human who did this to you spend the rest of his or her life with toes pointed stiff like a ballet dancer and see how they like it); and because weight is shifted back off the toes and onto the central foot pad. Problems with balance would be the result of gait problems along with the fact that you lack natural traction (those claws).
- problems using litter and thus the litter box. If this is an issue for you, consider using a soft litter such as one made from compressed newsprint (one such brand is Yesterdays News) which is soft on the paws and doesn’t get stuck in between the paws to cause irritation
- increased nervousness and aggressive behaviour (e.g. biting). No surprise here. If you don’t have a key element in your arsenal of defense, you are bound to be more anxious and are likely to bite. And you have told me you are biters. Moreover, one of the easiest antidotes to boredom is some form of outdoor experience. But you would be in danger without claws for defense. This means that you could only go outdoors (if at all) on a leash and harness, supervised by a human at all times; or in a cat enclosure that cannot be breached by other animals). 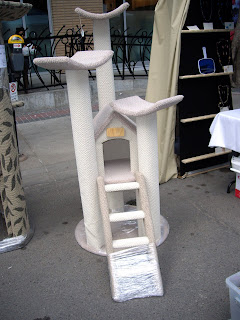 About That Cat Tree
So now to your specific questions. First, that cat tree. If you are still kittens, then you may not be ready for a cat tree until you have grown a bit. Otherwise the shelves on it will be too high and you could easily fall and hurt yourselves. But assuming you are at least a bit older you need to ask the following question: Can you leap?

If you can leap, then a cat tree can still be for you. Insist that Herself check the blog entry, A Cat Tree for Every Cat (press the relevant label on the right of the page) to get the necessary background first. For example, the tree on the right has lots of levels and a nice set of stairs, but I'd be a little concerns about the base's sturdiness given the overall size.

In your case, your tree MUST ALSO have the following: 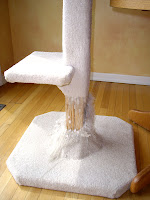 1) non-slip surfaces (carpet would be fine).
2) a very sturdy base so the tree won't waver when you leap at it; otherwise your confidence will tumble along with losing your balance. 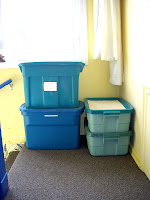 3) shelves or layers than you can leap to (since you will not be climbing up the post to get to them) – so make sure they are not too far apart. Even stacking heavy plastic storage containers - filled with stuff to weight them down and putting a non-slip runner or mat on the horizontal plane, makes a good tree equivalent. The example at the right serves as my viewing post upstairs. 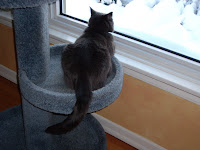 4) shelves that have a lip might be preferred so that once you are on one, you are less likely to fall off - as I so ably demonstrate here.

About Biting and Toys

Now as for toys. Before I can answer that question, I really do need a bit more information from you – about your current play habits, about what you can and cannot do (compared to cats who are not declawed), and about your biting habits (the circumstances in which you bite and likely victims). Send me that information and I’ll prepare a lovely list of toys and games for you.

Okay I know you are busy so I'll pique your curiousity while you are working on your reply: Read the adventures of Oliver, a reformed biter with lots of energy and a special toy. Consult the entries Oliver's Twists (March 4, 2010) and An Octopus makes It Right (March 21, 2010).

Sending purrs to you both, Greyce

Posted by I am Precious Greyce, Cat Advisor at 3:47 PM