This Yard IS Mine! (Indoors or Out Series 8) 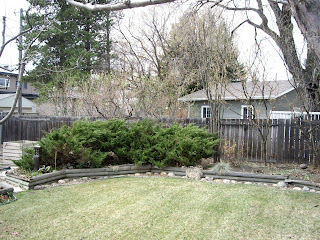 Finally I get to tell you all about my cat fence. I bet you can't even see the cat fence in this picture but I assure you it IS there!

It all started because I was a stray - on my own for about a month when Herself found me sitting on the ice in an early December. I had been an indoor-only cat but I owhad a taste of the outdoors. Don't get me wrong. I love central heating and secure shelter. But it wanted to go outside, too!

As winter turned to spring and I became increasingly interested in the outdoors, my friend, Nuit, offered the loan of her Figure 8 harness and lead so I could try it. I wanted to go outside so badly that I adapted to it like a duck to water. The folks were so delighted that they indulged my needs with a minimum of twice-daily walks around the premises. I walk like a curious catwhich means I wander, sit and watch, sit on the fence and watch, ponder, go down the back lane to check on the sassy tortie a few doors down, and go back to my driveway and eat grass, and maybe return to the front yard and sit on the steps. It takes about 20 to 30 minutes at a time -- when 'they' are in a hurry. Most times, I'm released into the backyard (where my cat fence is) and then I'm one my own, once my leash and harness are removed.

As the hours of daylight increased, I wanted to go outside more often. To make things easier, Herself tried tethering me. As I mentioned before, first I escaped from the harness itself and had a lovely wander around the yard; the next time, I pulled up the stake to which my lead was tethered and just dragged it with me. 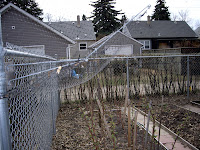 It was time for Themselves to take action. They debated. Herself was for an enclosure off the deck. But Himself, my true love, insisted that I be free to help him with the vegetable garden. They fenced in all parts of the yard and then proceeded to install a cat fence. The kind they got does not let me get out and does not let other cats in. That's it on the right in all its glory.

Of course, the same need for variety and change applies to using the backyard as to using an enclosure. A yard without plantings or wildlife or action is boring.

Once we got the wrinkles ironed out of it, it worked like a charm. The first wrinkle was that they hadn't completely secured the space between the regular fence and the ground. So with a bit of searching on my part, I found ways to get underneath and out into the back lane. The installation of river rock (the kind of rock used for garden rockeries) along the border put a stop to that.

The next wrinkle occurred later when a rather persistent cat insisted on getting up on our gate and trying to insert himself through a narrow opening between the gate and the garage wall. (I was convinced he was attracted by my good looks; but Herself says it was the large catmint bush that 'called' to him.) That problem was remedied with the insertion of a small bit of additional net.

And since then, the only mishap we've had was at 3:00 a.m. when a cat, new to the neighbourhood, hopped the neighbour's fence. He didn't see the cat fence and so he tumbled into it and it deposited him squarely into our garden. All went well until I ventured forth around 6:00 a.m. and started to wail. I was ushered back inside and the gate was left opened. He raced for it! And he has never returned. 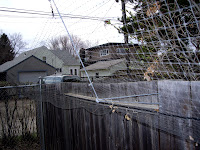 So all in all my folks are pleased with their efforts. Even though it was made in Texas, my fence survives Edmonton winters very well. They check from time to time so make sure the supports haven't loosened but other than the occasional adjustment, all is well. It gives them peace of mind that I am safe. Thank goodness for that, because that means I get the entire backyard for my purrsonal use most times I want it. 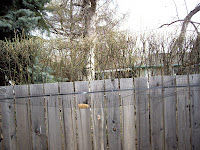 In the good weather (and after the vole and bird breeding season), they are pretty good about leaving the cat door open for me whenever they are home and awake. But during those seasons, they resent being disturbed by the sight of me bringing home lunch so the cat door is closed and they provide door service. (I'm a good catcher but never manage the killing bite; so with their help, most of my food cache is able to be released.)

Am I happy? That depends.

I'm pleased to have outdoor access and generous access at that. Coupled with several leash walks a day (at least two), my needs are reasonably satisfied.

But still, I really wish they'd buy the 12 surrounding properties and evict all the pets and kids who live in them, so I could have the place all to my self. I can't imagine why they don't consider it.

If you are interested in cat fences, check the resources below for ones made with net and ones made with PVC pipe. Also check out  as well as the ones listed in the blog entry from this series on cat enclosures (#7) because many of the enclosure sites include various kinds of cat fences, too. And there is LOTS to choose from!

Posted by I am Precious Greyce, Cat Advisor at 7:00 AM